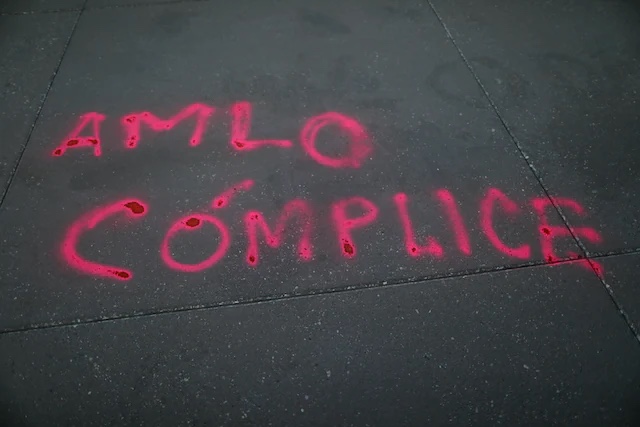 Basilia Castañeda was a 17-year-old political activist when, in 1998, she asked Félix Salgado Macedonio for help. Salgado was a powerful politician in the state of Guerrero. She says Salgado offered to give Castañeda a few pesos to return home, where she was supposed to join her husband, a friend of Salgado’s, for a political event. As she walked into Salgado’s home in Acapulco, a popular resort town, she says he reassured her. “Don’t worry girl, come over here,” Salgado said, leading her to a couch. “I’m going to take you to your partner.”

As Salgado excused himself, Castañeda felt safe. “I was calm, happy,” she recalled during an interview. “I thought I had been saved.” Salgado soon reemerged. His demeanor had changed. “He began to attack me. I could not avoid it. I was just young and without much strength against such an atrocious man,” Castañeda remembered. She said Salgado raped her, and after he pulled up his pants, he looked for his wallet and threw 100 pesos in her face.

Castañeda says she went to the authorities who, she maintains, abruptly dismissed her after she revealed the name of her alleged attacker. “’You have to go home, you cannot report this, this person is very influential,’” Castañeda says they told her. “Go home, live quietly and forget about this.”

But she did not forget.

Castañeda has tried to bring her alleged attacker to justice for years, taking her case to local, state and federal authorities. She even reached out to Salgado’s political party to try to prevent him from holding public office. She had no luck.

In 2006, Salgado became mayor of Acapulco. In 2017, another woman came forward. She had worked as a reporter at La Jornada newspaper and accused him of drugging her and raping her repeatedly. There are reports of other victims, but the accusations have been swept under the rug of political privilege.

“Those who received the complaints did not even intend to investigate them,” Claudia Ramos, an editor at the independent news site Animal Político who has covered Salgado for years, told me. “They were young women accusing a man with power. Who cared that the matter was properly was investigated to find out if the allegations were true? Who cared about the whistleblowers? Nobody.”

Salgado has faced no charges. He has said there is no proof to back the accusations and that he is the victim of a smear campaign. His lawyer says the accusations are full of contradictions.

But Salgado has found an even stronger advocate: Mexico’s president.

Salgado’s name returned to the headlines a few weeks ago after he was chosen by Morena, President Andrés Manuel López Obrador’s ruling party, to be a candidate for governor of Guerrero. Under Morena’s auspices, Salgado seems poised to win later this year.

Last week, Mexico’s president suggested the uproar over Salgado’s candidacy was due to political scheming in Guerrero. He dismissed calls to intervene. Salgado, López Obrador claimed, had been “lynched by the media.”

When a reporter asked if he had thoughts for Salgado’s alleged victims, Mexico’s president suggested a galling equivalency. “They are within their rights. But so are those in Guerrero who support Félix. It’s the same,” he said. “So, as they say: Enough is enough!” he concluded.

López Obrador’s decision to stand by Salgado has dismayed activists who have fought for years against the scourge of gender violence in Mexico. Hundreds of people took to Twitter to demand that López Obrador “break the pact” (a reference to the patriarchal and political pact) that seems to bind him to Salgado. Mexico’s president has not budged.

The author and journalist Lydia Cacho, a leading voice in the country’s struggle against sexual assault, told me López Obrador doesn’t seem to understand “that endorsing a man like Salgado confirms that he also belongs to the fraternity of protection and impunity of the worst in Mexico.”

Cacho has followed the Salgado accusations closely. There is, she says, “a clear historical pattern of misogynistic behavior, systematic accusations of hostility and sexual harassment (and) serious accusations of sexual violence and threats to silence the victims.”

For Ramos, the Salgado accusations confirm what Mexican women have feared and known for a long time: They are on their own. “Both the president and his party are telling all the women in this country that they don’t matter,” she told me. “If they are sexually, occupationally or socially violated, they will be ignored. They are telling them the only thing that matters to them is their political project.”

For Castañeda, López Obrador’s defense of the man she has accused of rape has felt like a betrayal. “I had faith in the current government, but they have disappointed me,” she said recently.

López Obrador’s refusal to call for a serious investigation and put the candidacy on hold is a major insult for a country that has seen an unprecendented mass feminist movement flood the streets in recent years demanding an end to impunity in cases of sexual and gender-based violence.

Published at The Wall Street Journal.